<- Back to top
For legibility purposes, the fragment is written below. The creative and ‘authentic’ piece is also available. The blackened spots represent the words that are missing due to the wine spills, water damage or the author crossing out words and swapping them for others. This is supposed to represent the original manuscript of a songwriter and display the chaotic nature of the creative process.

Love is complicated. Once one is intertwined with this almost ethereal concept, it is impossible to ever disentangle oneself from its grasp. It is inexplicable, yet somehow, it is so often beautifully encapsulated through art. This has led me to believe that the only perfect representation of such a concept can be through art, whether through lyric or physical media. The fragment I have is a representation of love--how messy, painful and destructive it is. But how, in the end, it is the source behind some powerful forms of art that at the same time, show beauty, passion and an unparalleled immortality. After all is said, the concept of love is complicated so how can I really represent it? This is why I thought it is very important to include a personal word from the ‘writer’ or ‘speaker’ of these lyrics themself, in their own perspective to their intended. It is also important to note that the following excerpt is written in the author of this fragmented song themself and not mine, Tiffany’s (of course, I understand that I am, actually, the creator behind both the fragment and excerpt, but I believe that it is impossible to keep the integrity of the intentions behind the fragment by trying to explain it through a third party perspective). This excerpt from the ‘speaker’ will serve as part of my “artistic statement” for the piece.

love letter lyric
You will never read this, so I suppose it shouldn’t matter. But for so many reasons, it does. I tried to compose a song for you but it turned out to be a huge mistake that only resulted in the largest mess I’ve made yet. How do I put you, my beautiful withered rose, into words? Into tune? This piece has come back to haunt me time and time again, no matter how hard I ball it up with my shaking, sweat-filled palms, no matter how deep I shove it into the garbage. It always comes crawling back to me like a vine, a parasite, refusing to die. I tried to kill it--burning it, drowning it in rain--but in the end, I don’t think I could ever kill you. In all honesty, I do not even know what it is to me anymore--I’ve spent way so long pouring my last breath into its sculpting it past perfection that I ended up destroying my progress. Doesn’t that sound familiar? Doesn’t that sound like us? I think it might be better this way, that not even I know what hides underneath the chaos--I think it rhymed once, near the start of it all. It made sense in the beginning before everything started going wrong one at a time. The only problem was, for us, it wasn’t as simple as spilt wine, drenched paper or crossed out lyrics. After everything I wrote this for you and even though you will never draw enough breath to read it with your own eyes, I gift it to you with a single black rose, hoping to one day see you again.


This excerpt that I wrote is to explain in a more personal way of how this fragment started out as a lovely song and ended up as a messy, destroyed piece of notebook paper. If the song represents love then one can see how fragile it can be to be tainted with such small things such as the wine and crumped piece of paper. But as ruined as it ever gets, this fragment shows how through it all, love still can survive and that there is still sense amidst the chaos. 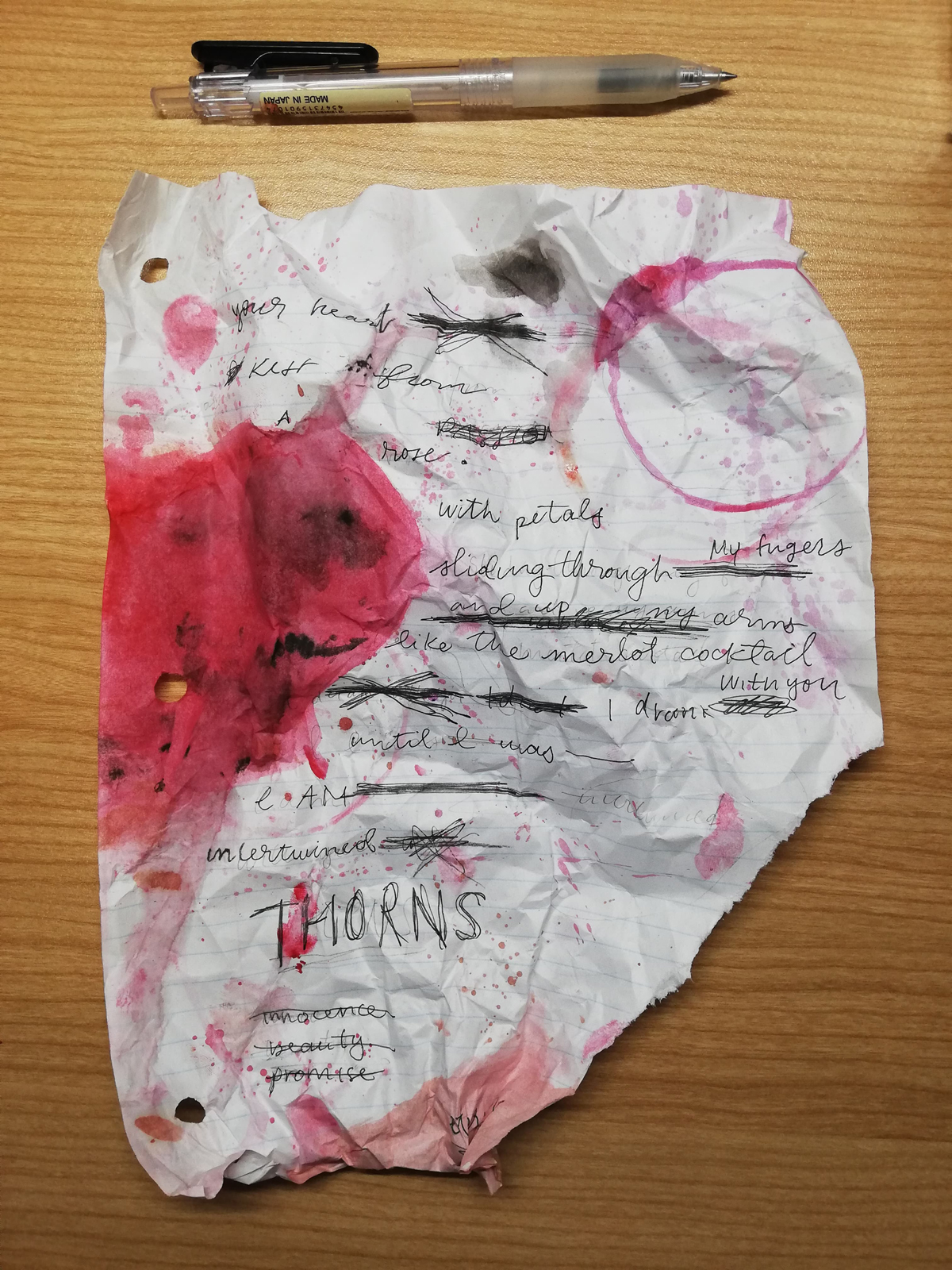